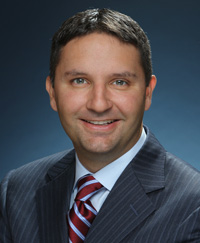 Mr. Petruzzelli earned a Bachelor of Science with Highest Distinction in Computer Engineering from the Pennsylvania State University at University Park. While obtaining his Computer Engineering degree, he served as President of Penn State’s Chapter of Tau Beta Pi, the National Engineering Honor Society. He then earned a Juris Doctor with High Honors from Rutgers Law School at Newark, NJ. While at Rutgers, he was an Editor of the Rutgers Law Review.

Prior to joining Rossi, Kimms & McDowell LLP as a Partner, Mr. Petruzzelli worked as Patent Counsel for Eastman Kodak Company, where he provided a full range of intellectual property services. While at Kodak, he drafted and prosecuted a full docket of patent applications. He also drafted, negotiated, and advised clients regarding various intellectual property agreements, such as University research agreements, joint development agreements, product evaluation agreements, licenses, assignments, and non-disclosure agreements. He developed, presented, and defended against patent assertions, supported patent litigation, and drafted non-infringement and invalidity opinions. In addition, he chaired the Patent Practice Committee. Before Kodak, Mr. Petruzzelli initiated his career as a Patent Attorney at Fitzpatrick, Cella, Harper and Scinto in New York, NY and later at Lowenstein Sandler in Roseland, NJ.

Mr. Petruzzelli represents established and developing companies, both domestic and international. He is an active member of the Rochester Intellectual Property Law Association in Rochester, NY, where he served on the Board from 2010-2017 and is presently an Appointed Officer. He has publicly presented and appeared in the media to discuss various intellectual property topics including as the featured guest on IMI’s Tech Talk Radio Show on KFNX AM1100 in Phoenix, AZ and the Business of LivingTM on WGCH AM1490 in Greenwich, CT, and he has been quoted in the Rochester Democrat & Chronicle’s article, “Has Rochester Lost Its Patent Edge”, which can be found at:

He has also appeared on Fox Rochester’s Good Day Rochester television show on behalf of the Rochester Intellectual Property Law Association’s annual Inventor of the Year event, which can be viewed at:

Mr. Petruzzelli is admitted to practice in New Jersey (2002) and New York (2003), and is registered to practice before the United States Patent and Trademark Office.